Doug Sits Down with ForBassPlayersOnly

Doug and Jon from ForBassPlayersOnly.com took a few minutes to talk about Doug’s background, his new release, Stank, and plans for another busy year. 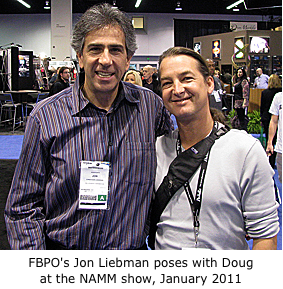 What kind of musical upbringing did you have? Didn’t you grow up in Cleveland?

I grew up in a small town about 20 miles west of Cleveland, and it was – still is – chock full of great musicians. But it wasn’t until later in my life that I had the wisdom to realize just how lucky I was to have the musical upbringing I did.

My mother, an artist, always had Ray Charles, Nat King Cole, Thelonious Monk and Sinatra playing in the house (and she was always whistling, too). My uncles turned me on to Jimi Hendrix, Frank Zappa, and Led Zeppelin. And my Aunt Kim played drums like nobody’s business.

And then my years coming up on the scene were always about blues, funk and jazz – based on the likes of Earth Wind and Fire, Tower of Power, Freddy King, Weather Report and Pat Metheny… So, if you mix all that together, I guess you could say it’s my musical DNA.

How did you end up choosing the bass?

I ended up on the bass in the same way that I think a lot of bass players do: I was in a band with my brother (a great guitarist by the way), and we needed a bass player. I actually played drums first – something of extreme value that I am constantly preaching to students today.  I still get behind a kit whenever I can.

I can remember buying my first bass guitar from a guy who sat next to me in English class. It turned out that the instrument agreed with me so well, you can almost say that the bass chose me.

Congratulations on the recent release of Stank. That’s quite a band you’ve assembled for it, too!

Thanks, Jon. I’m really grateful for the musical talents all of these guys bring to my music. From Oz Noy to Otmaro Ruiz to Kenny Anderson, every one of them is a perfect fit for my compositions. Truly some of the best musicians out there are on Stank.

How does Stank differ from your previous release, Pocket Fulla Nasty?

Haven’t you seen it? It’s green instead of blue.

Ha ha! Couldn’t resist! But seriously, I would say Stank is more compositionally defined. By that, I mean it’s a lot closer to what I’m hearing in my head. And that’s really the whole deal; I think you should always strive to record your soul in your music.

With each CD, I reach deeper and deeper, taking a snapshot of my “soul of the moment,” and I think Stank is a good example of this process. Over time, I’ve learned that I need to take more chances and be confident in what I believe – musically or otherwise – and hopefully I have the record button on when I do that!

You’re pretty involved in a lot of the bass-specific shows, like BassQuake, Bass Player Live, Bass Slam, BassBash… How do all these “rumblefests” differ? Or do they?

Rumblefest, I like that.  I’ve always joked that if you put the word “bass” in front of any other word, then you’ve got yourself a gig. It’s a great time for bass right now. And it’s suddenly cool to have bass-fronted projects.

Every event I play has a different line-up, a different audience and so naturally, a different vibe. I’ve played shows where it might be fair to call it a “rumblefest,” and others that couldn’t have been further from that description. Personally, I really like it when a bass event (or any show with multiple acts) has an MC tying everything together.

But no matter what, the energy is always high. The audience brings such an enthusiastic, open mindedness, and I really respond to that as a musician. Some of my most personally satisfying performances have happened at bass-specific events because of the unique energy they all seem to have. Just can’t find that vibe everywhere.

Tell me about the Doug Johns Duo you have with drummer Chris Ceja.

The duo came out of economical necessity a few years back. Chris and I played for many years in different, larger ensembles, and we really loved it. But the truth is, there just isn’t a budget for a 4-5-piece group like there used to be. So, when it came time to tour in support of my music, we took a “just do it” approach, rolled up our sleeves, and never looked back.

Chris Ceja is a true brother in the sense that we’ve been playing together for almost 30 years, and I truly am grateful for our personal and musical relationship. The years spent together, in many musical situations, have helped us immensely. Because it can be challenging to play as a duo – it’s a totally different way of thinking and playing.

But, touring with a two-piece act affords us the luxury of playing at a lot more venues than we would if there were 2 or 3 more musicians to feed. And as an added bonus, it’s taught me that I need to entertain first and foremost. After all, playing music live is entertainment at its core, and when you’re on the stage with just one other guy… well, you had better learn to relax and make it fun.

What else is keeping you busy these days?

I’ve been conducting a lot of clinics and bass/rhythm workshops with the support of my good friends at Genz Benz and Pedulla, and I have to say it’s one of my favorite things to do. There’s just nothing better than having a chance to play a little, hang with great people, and share ideas. It’s just so inspiring to really get to know each other in a musical setting. I have met some of the coolest people at clinics.

What lies ahead for you and your career? What can we look forward to seeing and hearing from Doug Johns?

The next year or two look like they will be keeping me really busy, Jon. Right now, I’m connecting all the pieces and putting the finishing touches on a new Doug Johns website. I’ve been looking forward to this site because I wanted to put something more interactive and more informational out there. And I think my new site will do that – it’s got more content, more photos, a store…. I can’t wait for everyone to see it.

Redesigning my web site is kind of the first stepping-stone along the way to a few very big projects. I plan to film a live DVD this year to coincide with a full-band performance of Stank, and I also want to produce an instructional DVD. And of course, a lot of shows and clinics are in the works, including quite a few new venues. Sometimes I feel like it’s hard finding time to actually play the bass!

What do you do when you’re not immersed in music and the bass?

Lots of things. This kind of ties in with what I was saying about my new website – that I wanted it to have more information. Well, one of the pages on my new site is called, “My Other Life,” and it’s about what I do when I’m not playing bass. In addition to my music career, I fabricate and build chassis for several drag racing and NASCAR teams… and of course, I’ve got a drag car of my own. Cars are something I’ve always enjoyed and worked with for as long as I can remember.

My other passion is hiking in the remote backcountry – canyons of the southwest, in particular. Hiking and just nature in general are a huge component of my life. I can honestly say I draw most of my inspiration from nature. To me that is where all of life’s answers are.

This entry was posted in Events. Bookmark the permalink.