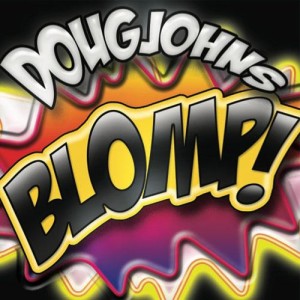 On his fourth CD, Doug Johns doesn’t change what ain’t broken: He’s still super-funky, still up in the mix, still surrounded by great players, and still using hellacious chops in the service of feel-good tracks with roots in the 70’s…. and his solo bass piece, “For Andy,” is a perfect showcase for his soulful, mellower side. – E.E. Bradman

Doug Johns has recruited a great group of musicians and has put together one tight, well-arranged, often syncopated hot mess of tasty Funk… Buy this CD! It makes a great addition to any respectable Bass collection! – Raul Amador   (Read More)

Doug Johns, definitely not one to disappoint with any of his releases, has remarkably done it yet again with his latest release of BLOMP!…  This release showcases Doug’s never-ending talent and amazing songwriting that never ceases to amaze…BLOMP! will have you groovin’ along with some really well played and constructed tunes… not to be missed. –Ty Campbell (Read More)

Of course, you can once again confirm, as this extraordinary musician knows how to put their skills to the service of an intelligent approach, which aims to go beyond the edge of Funk, while not forgetting a good dose of catchiness in pieces. Ultimately, the American artist is reconfirmed for its authentic authenticity and the unmistakable beat. –Andrea (Read More)

Doug Johns’ SuperFunky Music. Armed with a fresh approach and Doug’s unique brand of greasy bass, BLOMP! hits you with 10 superfunky tracks. When you turn to the band and say, “Hit me,” the sound you hear in return had better be BLOMP! Released November, 2012.

Or, would you like to listen to Doug’s second CD, “POCKET FULLA NASTY”?

Or… you can check out Doug’s first CD, where it all began… CLICK HERE